Got up early and took a three hour walk along Fisher Road and Tupapakurua Falls, as on Tuesday afternoon. Pretty much the same bird species and numbers today. It was cloudy and some drizzle now and then and I felt sorrow for those who intend to undertake the Tongariro Crossing this day. I packed my things, compiled my sightings and headed to the station at noon. Suddenly the weather shifted. Sunshine and decreasing cloud. I took a seat in the small garden and ordered a latte. I absorb the springtime feeling. A lilacbush (syren) were flowering, Starlings had hatched and lot of beautiful and tiny daisy in the grass. I just enjoy the moment as the train were delayed about an hour.

The second part of the Tranz Scenic between Auckland and Wellington were at times just amazing and breathtaking! Highly recommended for future visitors. I arrived to Wellington at 8pm. Had a nice walk in the evening along the waterfront to the slope of Mount Victoria where XBase backpackers is located. After a nice shower and seafood take away it's time for bed. Tomorrow I will certainly have a nice lie-in!

What a fantastic day! It started, for me, at 6am and from my bed I could see the light of dawn. I got up and entered the big kitchen of the backpackers place for a nice breakfast in silence. The kitchen windows facing all three vulcanic summits: Tongariro, Ngauruhoe and Ruapehu. The sun were just about to rise between Ngauruhoe and Ruapehu and only a few scattered clouds in the horizon. What a wonderful sight and it felt like a very god omen for the day. As a matter of fact Mount Ngauruhoe was used as a stand-in for the fictional Mount Doom in The Lord of the Rings movie trilogy. And everyone knows that Sauron has left the building, the ring was destroyed, Mount Doom is asleep and no orch has been seen in the area since then. So, as the sun start to rise over Mordor I felt pretty safe and in good spirit.

The bus picked us up 7:15am and we reached the start of Tongariro Alpine Crossing about 35 minutes later. The weather were perfect and just calm winds. No need for a jacket when walking, but a shirt only. The track is 19,4 kilometres and takes about 7-8 hours to walk. The start is about 800 metres above sea level and the highest point of the crossing is about 1960 metres. To cut a long story short, the walk were just amazing and unforgettable, even though my legs says something else at the moment. I think the sample of photos below depicts  what words can't describe.

Got up at 6am, packed the last things and had a soft breakfast at X Bas. An easy walk along Queen street to the train station and got aboard on the train to Wellington and my destination National Park Village. Besides good company of a nice girl (originally from France) and her daughter, the railway offered an amazing scenery and a lot of nice bird sightings too! During the five hours of travel I saw, for example, Swamp Harrier (14), Spotted Dove (1), Little Shag (4), New Zealand Pigeon (36), Paradise Shelduck (66), Black Svan (1 on nest), Australian Magpie (10) and Masked Lapwing (5). But the real surprise were all these Purple Swamphens on the fields (besides sheep and cows) and I give up the counting at 150 or something.
We reached National Park village at 13:00 and I checked in pre-booked double at the NP Backpackers, which is a nice place and also contains climbing walls for those interested. I studied maps and found a nice track for the afternoon: Fisher Road and Tupapakurua Falls. It was a great track along streams and through native forest and a couple of good outlooks. It were lot of birds around and a good practice to tell them apart by the sound. My favourites among the singing birds were Tomtit, Tui and Grey Fantail. Other bird specialties new for me were Silvereye, Bellbird, Whitehead and Grey Gerygone. It was indeed a lovely walk, which took a little more than three hours.
And now it's time for sleep. Have to get up at 6am again as the bus to Tongariro Crossing leaves the place at 7am. The hike will take about eight hours so it's better to be thoroughly rested. God night!

Posted by Niklas Holmström at 21:16 No comments:

A full day pelagic on Hauraki Gulf with Pterodroma Pelagic was planned, but due to few partcipants the trip were cancelled about a week ago. However, in short time an option of a half day pelagic were offered, which made me happy as there were still a chance to see New Zealand Storm-petrel. Unfortunately, mainly because of misunderstandings, the departure place were located to far away and I couldn't find any transports. I was quite sad when I phoned Karen to tell her the bad news early in the morning. No pelagic and still no baggage. What a bad start! But, there were an alternative, which I had checked last week when I received the message that the full day pelagic were cancelled. There is 4,5 hours Whale and Dolphin tours on Hauraki Gulf with departure from the harbour in Auckland (e.g. ten minutes walk from my accommodation). I called them and they told me that it would be a tour in the afternoon. I left the baggage issue behind. Had a tasty lunch in the harbour area and got aboard the huge catamaran, which took off at 13:30.
The weather were perfect, more or less clear blue sky, rather calm sea and moderate winds. The skipper were very knowledgeable and in amusing way. We steered for Coromandel Peninsula, Little and Great Barrier Islands. Well offshore we found several areas with dolphins and seabirds foraging. At three occasions during the pelagic the numbers of seabirds were huge and it was somewhat an orgiastic experience. Perhaps a foretaste of Kaikoura later on. Australian Gannets, Flesh-footed and Fluttering Shearwaters were the most numerous seabirds with several hundreds. I also recorded Buller's Shearwater (40), Sooty Shearwater (15), Pomarine Skua (5), Parasitic Skua (2), Little Penguin (50), White-fronted Tern (30) and Pied Cormorant. In addition we saw about 200 Short-beaked Common Dolphins and two Bryde's Whales! What a great day at sea! We landed at 18:15, mentally exhausted, but happy in mind! The beautiful Buller's and all the cute penguins were a happy experience.
When I got back to X Base the airport had delivered my baggage. I celebrated with a shower and a nice seafood dinner. Now it's time for bed. Up early tomorrow and catch the train to Tongariro National Park.
Posted by Niklas Holmström at 22:55 No comments:

After about 35 hours travel I finally arrived to Auckland airport at noon on Sunday 7th. Sunny and about 20 degree. Passing through the customs went smoothly, but an unhappy surprise were waiting at the baggage claim. There were no baggage for me and the staff told me it was left behind in Hong Kong. The flight company Cathay Pacific were very helpful and said it would be delivered to my accommodation on Monday, and they gave $NZ130 for the trouble. Outside the airport I took a latte and enjoyed the weather and the took the bus to X Base in central Auckland, where I had booked a double for my arrival as well as prior to my departure. Great place and located close to almost everything in Auckland, for my concerns. Walking distance to the nice harbour and train station. I found several good stores for outdoor life, if my baggage wouldn't arrive on Monday. One learn quickly that it is not so many items in the travelling kit that is very important.

I had a nice afternoon exploring central Auckland. Strange, but having flew all the way to NZ the first bird species I recorded were Starlings, Blackbirds and House Sparrows. I heard and saw a few Myna's (also introduced) during my walk and at the harbour walk I got my first true tick in several nice Red-billed Gulls!

As I were so exhausted after the travel and not much of sleep I got to bed at 19:30 and fell in sleep at once and woke up 10 hours later.

Posted by Niklas Holmström at 12:14 No comments:

Just relaxing and having a couple of latte at Hong Kong airport after the first marathon flight, which I almost missed as the flight from Stockholm to Heathrow were delayed. However, I am getting used to run through airports catching up connecting flights. Lucky me I am a well-trained runner ;-) Soon it's time for the final marathon flight, but I am in good spirit. Cheers, until next update. 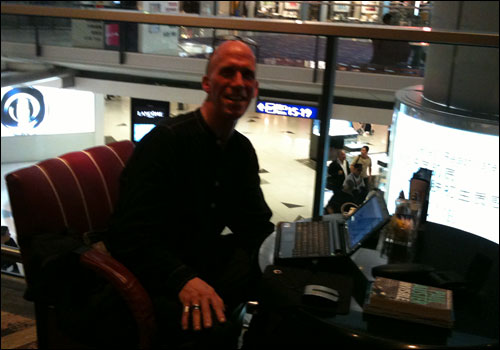 Posted by Niklas Holmström at 00:11 No comments: